"My ceramic lamps are made from porcelain and the play of light that surrounds us. Each one is hand-crafted and is an individual item. The forms are realized on the potters-wheel with the thinnest possible thickness ensuring maximum light translucency. Soft free-formed porcelain is then textured and worked to create lamps with unique shapes and surfaces. Before being fired at 1260° C, each lamp is treated with a transparent glaze which further heightens its translucency.

The work strives to find the perfect combination between a natural form and a living one."

In his art made of porcelain, the ceramist Mathias Pfeiffer presents his sculptural works intending to imbue the objects of everyday use references to nature without losing their functional aspects. The purity of light and subtle, white colors allow for exploration of the manifold surface structures and details. The transparency of this mysterious objects changes according to light incidence, turning them from cool smooth objects into warm bodies emphasizing organic outlines. The artwork of Mathias Pfeiffer was shown in many galleries and exhibitions in Europe, Africa and South America as well as in the United States. Selected pieces have also been sold at the Guggenheim Shop in New York. 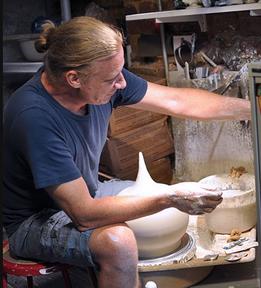